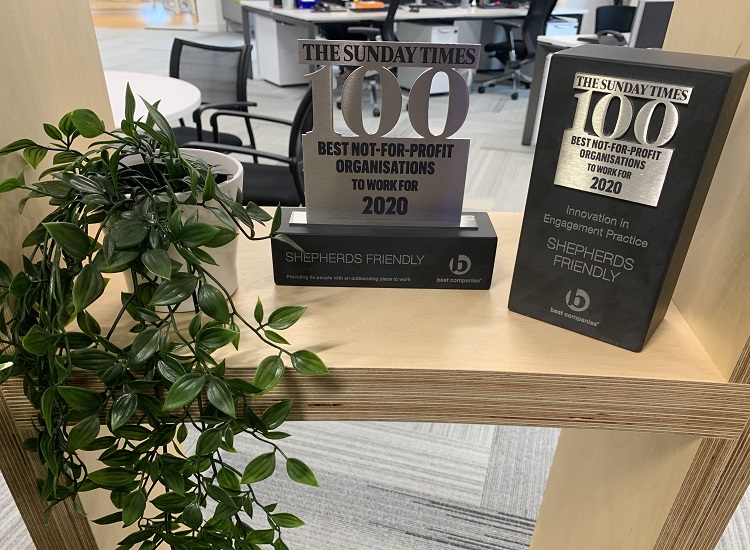 Our official place in The Sunday Times Top 100 Best Companies to Work For has been announced! We are thrilled to share the great news that we placed 21st in Best Not-For-Profit Organisations to Work For 2020 list.

The Sunday Times Top 100 Best Companies To Work For celebrates and recognises organisations with the very best in workplace engagement.

We ranked 21 out of 100 having already received a 2-star Best Companies accreditation earlier on this year for our outstanding commitment to workplace engagement.

Some of the companies who also made the top 100 list include; Manchester City Council, Alzheimer’s Research UK and Salvation Army Housing Association. You can view the complete Best 100 Not-For-Profit Organisations list with everyone’s ranking here.

The awards and good news doesn’t end here. At the ceremony held last night, not only did we find out our 21st ranking, we also won the ‘Innovation in Engagement Practice’ award for our Mutual Moments initiative, launched earlier on last year.

“It is an honour to have been named as 21st in The Sunday Times Top 100 Best Companies to Work For list. This fantastic achievement was made possible because of the wonderful feedback from our staff, and it’s great to know that the culture we work so hard to build is appreciated by everyone working at the Society.

“We are constantly looking for ways to make improvements to workplace engagement, so as to create a positive environment, for staff and members alike. This award recognises the commitment and contribution of everyone here in doing just that.”

“I would like to congratulate Shepherds Friendly Society on your achievement

“Best Companies have been producing the accreditation standard since 2006 to acknowledge excellence in the workplace.

“Organisations like Shepherds Friendly Society have continued to focus on their employees and have been rewarded with an engaged workforce who tell us that this is a best company to work for.”